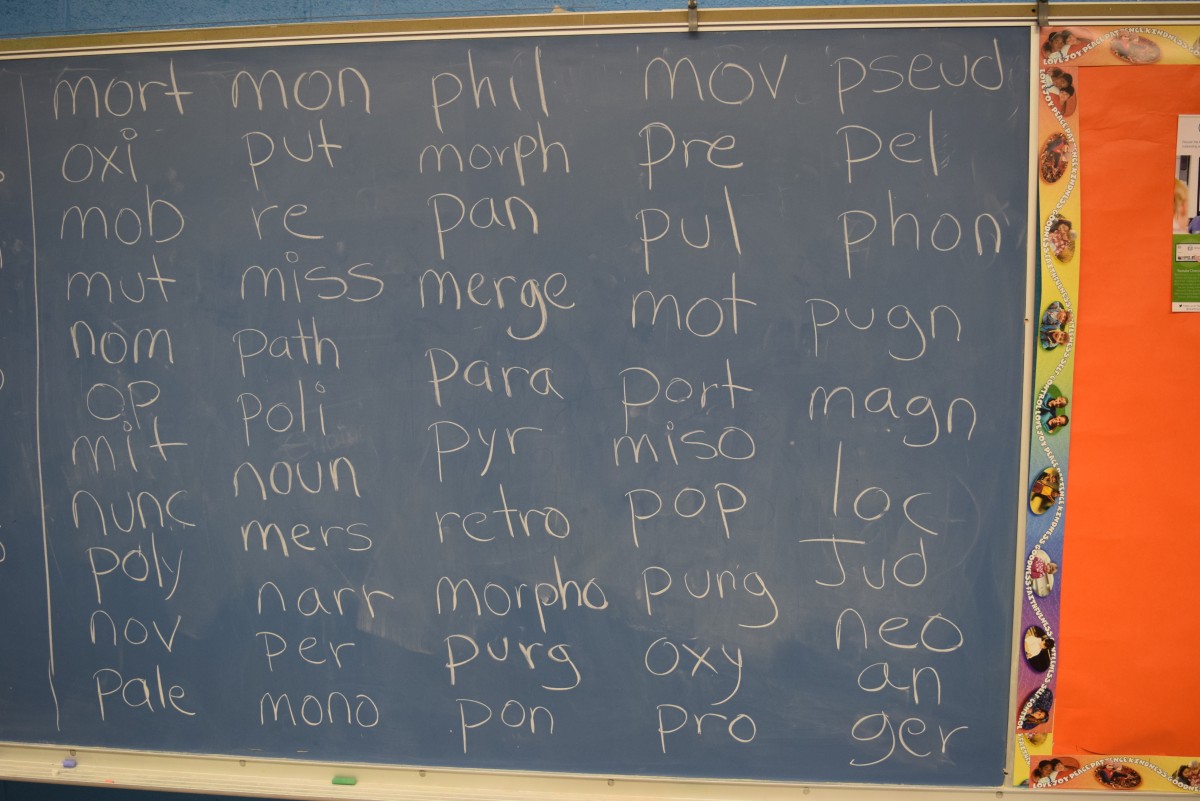 Saving the English language is one of The News School’s primary goals. In response to this concept, the students are given Latin and Greek prefixes/suffixes to memorize. The central theory behind teaching these is learning to read with purpose.

Teaching a person to read carefully and with unfailing comprehension can be difficult. When the public school system quit teaching Latin, the ability for producing strong readers fell by the wayside. Students are forced to use dictionaries. Whereas understanding how words are composed is actually the first step to achieving the goal — the dictionary and thesaurus would be the second and third tools.

For example, the word dehydration. When looking at this word, a person who has a basic understanding of common Latin would break this word down for a literal definition.

In the first example, the literal definition tells the reader that the dehydration can happen anywhere, whereas the dictionary says it is a term related only to humans. The second shows the literal and dictionary meanings are the same, but the benefit of knowing the roots will keep a person from having to go the dictionary.

Without knowing Latin and Greek prefixes/suffixes, people are left to decide the meaning on their own. Who wants to stop what they are reading to find a dictionary?

Many people have different understandings of a given word and thusly apply what they think the term means to the speaker’s voice. Frequently, this causes confusion for all parties involved.

What Is Reading With Purpose?

An author’s writing method begins with a goal. The intent is either to entertain, inform, describe, or to persuade. The reader should know beforehand what the author’s purpose is; this will aid in the overall understanding of how to interpret what is being said. This is called categorization.

If the writer intended for a story to be humorous but the reader thinks it is to inform, there could be a big misunderstanding. On the other hand, when the writer and reader are in agreement, success will occur.

To begin the practice of reading with purpose one must start by reading aloud, enunciating each word individually, and stopping or pausing for punctuation. This is best practiced with a reading partner, primarily for feedback. Developing this skill takes time and practice, but it is well worth the effort.

Understanding the content of what is read is another equally important skill. A good author will tell the reader what their topic is when creating a title. Storylines that veer off topic may confuse an inexperienced reader. However, when comprehension skills are strong, the reader can follow the story, understand the intent, and relay what they have gleaned from the writing.

High-stakes testing requirements caused states like Texas, Massachusetts, and Virginia to add Latin to their curriculum to raise their language arts scores, according to Time Magazine. While the concept of standardized testing is controversial, the results of teaching Latin have proven impressive.

In a Virginia third-grade classroom, Amy High enthusiastically told her students: “Latin’s going to open up so many doors for you. You’re going to be able to figure out the meaning of words you’ve never seen before.”

High’s exuberance is echoed by many education professionals, “If we’re trying to improve English skills, teaching Latin is an awfully effective, [proven] method.” Teaching children to comprehend the English language by introducing Latin, an almost phonetic language, is a prudent approach.

The main reason is that over 65 percent of English words have Latin or Greek roots. Other explanations include; Latin is phonetic; each letter has a sound; there are no silent letters; and the kids master simple, consistent, and logical grammar. Then they grasp English concepts more readily.

The federal government funded underperforming urban schools in the 1970-80s, and the monies were earmarked for teaching Latin. A controlled evaluation of students learning Latin and those undergoing traditional English training was conducted over a one-year period.

The Latin-educated children’s scores showed that they performed five months to a year higher than those in the control group. Not only did they excel in reading comprehension and vocabulary, but the students showed the same gains in history, math, and geography. Unfortunately, after budget cuts, most counties canceled the Latin education program.

Time Magazine: The New Case for Latin
The Glossary of Education Reform: High-Stakes Testing Definition
Dictionary.com: What Percentage of English Words are Derived from Latin?

The News School: A Testimonial

Education, Engagement, and Hope for the Future